Ok, we all remember what happened the last time the Tigers played the Royals … let’s hope tonight’s game is the start of a turnaround that was supposed to happen when all these big hitters were brought to the Motor City,

Nate the Great in action today

Nate Robertson hits the hill for the Tigers today against the Pirates.

In two games — one start — Robertson has only given up one run, but more importantly, he has struck out five. He’s also given up five hits. 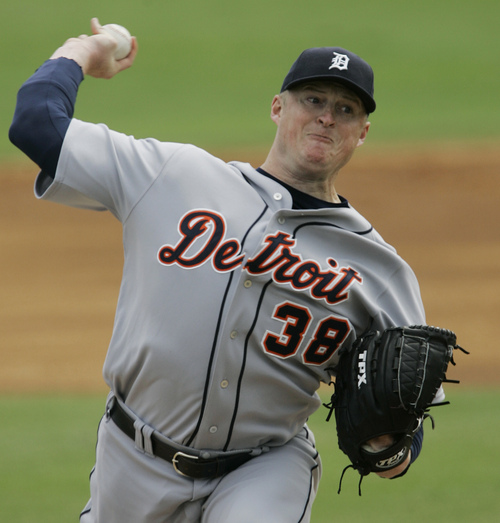 AP PHOTO — Bondo in action Saturday against the Blue Jays. The Tigers’ ace gave up three runs on five hits.

BONDO NOT SO GOOD
For lack of a better term, Bonderman was pretty bad Saturday against the Blue Jays.

In four innings (yes, four) he gave up three runs — and a homer — on five hits. Not what Tiger fans want to see out of their ace.

On the offensive side, Polanco hit a homer
as did Mike Hessman, but it wasn’t enough.

The Tigers fall to 6-5 on the season.

Bondo on the Bumb
Today at 1 p.m. Bonderman will make his third spring start, and so far, so good. However, there is still some room for improvement.

In two starts this spring, the 26-year-old righty has been decent. He has tossed five innings and given up two runs. But keep in mind, he’s been working on a few pitches. It would be nice to see him get a few more Ks today.

Today against the Blue Jays, he’ll get a test going against a pretty solid lineup.

The Tigers will try to end their three game winless streak today when they take on the Astros.

Nate Robinson is on the bump for the Tigs, while Roy Oswalt will start for the Astros. Robinson needs to pitch a tad better this time around. In his first outing he gave up a run on three hits, while also hitting a batter.

I think the story on mlive is the beginning of the end for Brandon Inge. If anyone has yet to read this, the link is below.

I think this will not end well. Inge, put the team first, especially since you have a chance at another World Series run.

Two in a row? Oh well, it’s only Spring Training.
The Tigers fell 10-9, but showed off their offense once again. I guess I may have jinxed the team when I boasted about the team’s 1.80 ERA.
The important news was Bonderman pitched well in his three innings. He allowed two hits, but struck out three. Thames had a nice bomb (pictures above) as well.

Bondo will make his second start today at 1 p.m. against the Devil Rays in the team’s 6th Spring Training game.

Hopefully he’ll pitch better than his first outing where he gave up 2 runs on four hits.

Jake McGee is scheduled on the hill for the Rays.

One note: Through five games of Grapefruit League action, the Tigers have posted a 1.80 ERA. 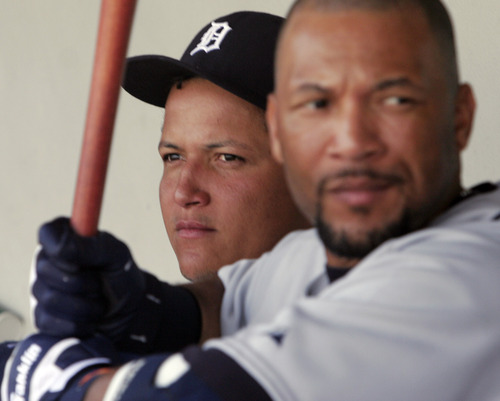 The Gambler was on the bump and Sheff made his debut, but as the old sports cliche goes: You can’t win ’em all.

The Tigers fell short 3-1 to the Indians, losing their first game of Spring Training. After five games the Tigers are 3-1-1.

Rogers was pretty solid in two innings, only allowing two hits and a walk. Sheff, however, went 0 for 3.

Matt Mantei gave up two runs in the fourth that proved the difference.

Sunday’s Stud: Let’s go with the Old Man. Two innings and only three base runners for Rogers is pretty good.